It wasn’t until recently that I had gotten hip to the curved shower bar, I’ll admit. My parents were watching my toddler while I went for a jog, and we decided to stay for dinner after I got back. I took a quick shower there, which was strange for a number of reasons. (For starters, it’s been a while since I’ve taken a shower in my parents bathroom.) But more importantly, they had installed a curved shower bar. So for the duration of the shower I wasn’t battling/bumping into the shower curtain, which is a common occurrence in my own shower. If you’ve never showered with a curved shower bar, you’re seriously missing out. You wouldn’t guess it, but it’s a game changer. Whoever came up with the idea was just. simply. brilliant. And it made me realize that my own shower was just. simply. lacking.

You see, we often like to feature guest posts from other experts in the industry here on our blog. (If you’re a frequent visitor, you’ve noticed that.) This week, I was contacted by a representative at The Rotator Rod in regards to highlighting their product on our site. When I took at look at what their product was, I was almost elated. (I know. That’s a fairly big word to use about a shower rod, but bear with me.)

After the shower experience at my parents house, I certainly thought about getting my own curved shower rod. The problem is: I have a shoebox sized bathroom. Giving me extra space in the shower would seriously limit the space I had outside of the shower. Clearly a lose/lose situation. Whomever invented the Rotator Rod has slipped along a small spot of brilliance though. The curtain rod (as the name would suggest) rotates, giving you more space when you’re in the shower, and then back above the bath for more space in the bathroom when you’re done. 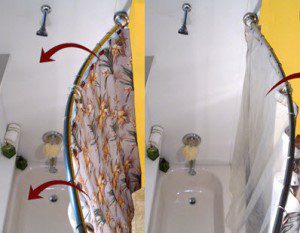 I’m getting one. That’s all there is to it. And I’m pretty excited about it.

If you’re sick of sticking to the shower curtain too, grab one of these here.