Changing out an iron chandelier to a ceiling fan is certainly a do-able option. You may need to change the electrical box out to an approved fan box.  In newer homes it is common practice to use a fan box to hang a chandelier from.  The difference between a fan box and a standard ceiling fixture box is the way it mounts the framing and the size of the screws or studs it has to hang the fixture from.  Fan boxes are rated for more weight than a standard box and have metal brackets that attach them to the studs or framing instead of just having a couple nails. Additionally, the screws or studs will be at least #10 where a standard box will have holes for 8/32 screws. 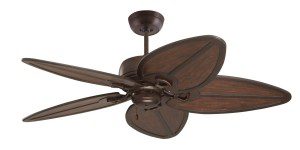